Wooded Hillside of the Wolf - Allt-y-Bela 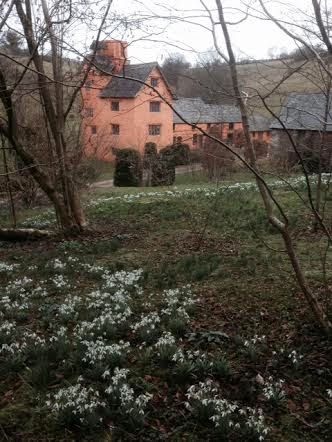 Recently,  Jez and I rode past Allt-y-Bella, a very beautiful medieval farm house, with an unusual bell tower, nestled in a hidden valley near the hamlet of Llangeview near Usk.

When I was in my teens in the 1970s,  I would regularly ride past Allt-y-Bela following ancient paths and tracks that were once used by cattle drovers taking beasts to market. As a thirteen year old girl on a pony, I didn't really fully understand the historical significance of the partial ruin I was passing, but I knew it must have been quite an impressive and beautiful house when it was built.

At that time I recall there was lot of scrap farm machinery and old cars and caravans piled up around the ruin and in the surrounding fields, belonging to local farmer Lewis Williams. All in all it was in a very sorry, almost derelict state. The photos below from Monmouthshire County Council show Allt-y-Bela looking very much as I remember it in a very ruinous condition! 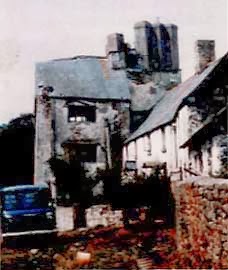 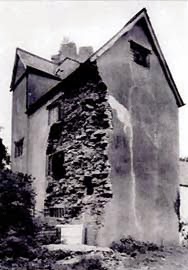 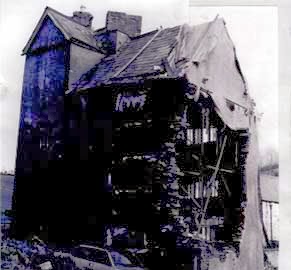 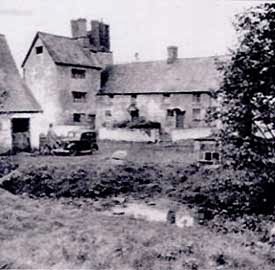 Fred Hando wrote about Allt-y-Bela in 1951 and like me he remembered it being called by local people 'Artie Bella' or 'Altie Bela', as most of the local people I knew when growing up, referred to it. Fred Hando was clearly very taken with the position and beauty of this house and its very intriguing history.

The photo shows Allt-y-Bela in the 1950's as it would have looked when Fred visited.

Allt-y-Bela was built as a hall house in the mid 15th century sometime around 1420, and would originally have been a long, single storey, construction with mullioned windows. The name Allt-y-Bela translates from the Welsh as 'Wooded Hillside/ Heights or Cliff of The Wolf'.  About 100 years later in 1550 a first floor was added with chimneys and dormer windows.

In 1599, a wealthy wool merchant from the Midlands, Roger Edwards, added the three storey Renaissance Bell Tower at one end. On his visit to Allt-y-Bela in the late 1940's early 1950's, Fred Hando noted the builder's inscription mark -1599, E.R. R.E (taken to mean Elizabeth Regina the Queen at the time and Roger Edwards) - and was also shown  by the owner, local farmer, Mr Moseley, the central spiral staircase running up through the tower which was built around a massive single tree-trunk newel post. Hando noted that the stair treads had holes through which bell-ropes would once have passed up to the tiny bellcote, with a bellframe, at the very top of the tower, but the bell by then, had allegedly been moved to the nearby church at Llangeview.

The purpose of the bell tower is not fully known, but it is thought that as the Edwards family belonged to a strict religious sect, the bell might have summoned members of the sect to services. Hando refers to his thought of the bell summoning farm workers from the fields for their refreshments - so perhaps the bell  at Allt-y-Bela served a number of functions.

Fred Hando tells the interesting story of how Roger Edwards came to bequeath his wealth to charity rather than leave it to his heir.

"When Roger Edwards was eighty, a hopeful nephew went there to look after his uncle. The years passed; each morning the hale old squire took his morning canter; at last the impatient nephew decided to wait no longer.When next his uncle was mounted on his pony, the nephew, pretending to adjust the saddle, cut the girths, hoping that at the first corner the rider would be thrown and killed. Riding slowly along, Roger noticed a slight movement of his saddle, and soon found the cause."

Following this incident, Roger Edwards changed his will. When he died on 28th March 1624 Edwards' money did not go to the nephew but was used for charitable purposes. The almshouses at Llangeview were founded on his instructions to give homes to 'necessitous persons' of three local parishes. Under the terms of the Roger Edwards Charity, the almshouse dwellers are 'occupants by licence', not tenants, and pay a 'maintenance contribution', not rent. Attached to the building was a chapel, with a chaplain appointed by the trustees. When I was a small child in the 1960s I remember walking up the hill from Yew Tree Cottage with my Mother with my small sisters in the pram and myself and my brother trudging alongside, when we reached the Alms Houses at the top Mum would stop and talk to the old people that were living in them at the time.

By the time I was in my teens however, the Alms Houses had pretty much fallen into disuse and they lay sad and unused until the 1990's when the 12 original tiny Alms Houses and chapel were converted into five more modern cosy cottages. The Roger Edwards legacy lives on in these through the Roger Edwards Alms House Charity which aims to provide low cost rural housing for local people. When one of the cottages becomes vacant you can apply to rent it, if you meet their criteria of being 'local' (see link below for details). several of my friends have had these as 'starter homes' and they are really lovely and in a lovely location! 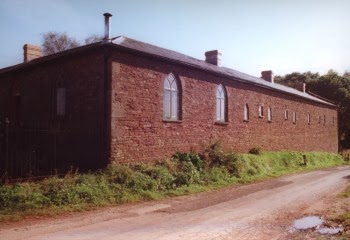 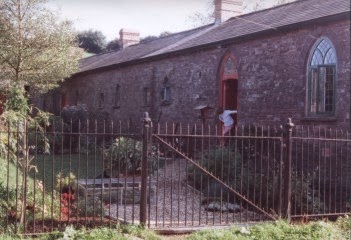 Roger Edwards also made provision in his will to found the Grammar School in Usk. My Mum taught at this school when it was Usk Secondary Modern School in the late 1950's and 1960's before it closed. I will write more about the school in another post! Edwards also founded Almshouses in Newland, Gloucestershire, which still retain many of their original 17th Characteristics.

The decline and rise of of Allt-y-Bella

After Roger Edwards' death, Allt-y-Bela was passed down to various descendants until it was sold to a local farmer, Mr Moseley in the 20th Century. By the 1980's, the building had been totally abandoned, the tower being held up by make-shift scaffolding and the tree trunk in the centre supporting the staircase.

Derelict for over 30 years, and having been used as a grain store and farm, the tower was in serious need of repair. Allt-y-Bela's condition came to the attention of Monmouthshire County Council, who attempted to remedy the situation by serving repairs notices and following the legal procedures as required by the building's Grade 2 listed status. However, these were unsuccessful, and in 2001, the Council served a compulsory purchase order on the building, and handed it over to the Spitalfields Trust for restoration.  The Trust secured a £300,000 grant from Cadw, borrowed the same amount from the Architectural Heritage Fund, and also spent £400,000 of its own funds on restoration. 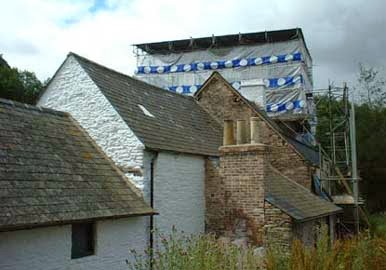 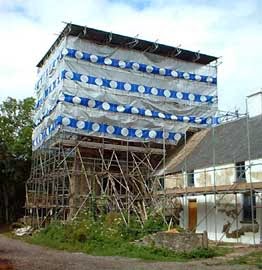 Allt-y-Bela is today run as a bed and breakfast guest house by owner William Collinson. There are three guest rooms, with the interiors containing exposed wooden beams, leaded casement windows and richly polished floorboards. Downstairs there are flagstone floors and original architectural features.The garden is designed by Collinson's partner, Chelsea Gold Medal winner Arne Maynard. Garden design courses are run at Allt-y-Bela periodically. Enquire via the links below. One of the first things the current owners did was paint the house in a golden ochre colour - they felt cream looked too harsh against the landscape. Chipping away at the layers of paint on the building they found the golden/orangey colour underneath and decided to restore it. The yellow ochre colour, is a colour that would have been used in medieval times from 1400s, although generally houses tended to be white washed/lime washed most commonly. The house is not open to the public but you can get a good view of it as you pass.

Fully restored, Allt-y-Bela is a stunning sight as you approach it down the steep, old drovers track from Coed Cwnr, either on foot, or on horseback as we did! I think Roger Edwards and Fred Hando would approve don't you? You can also approach Allt-y-Bela along the lane from Llangeview. 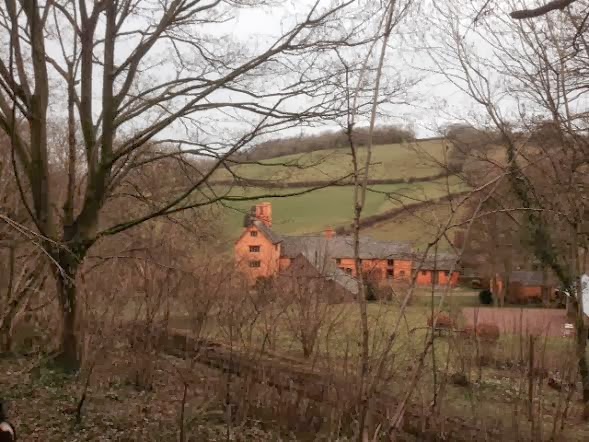 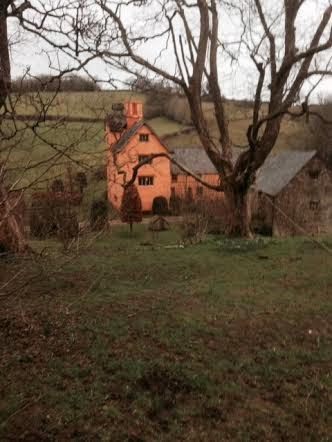 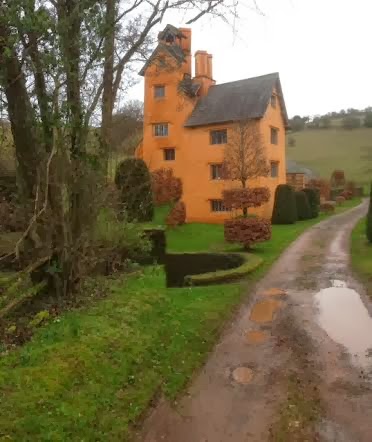 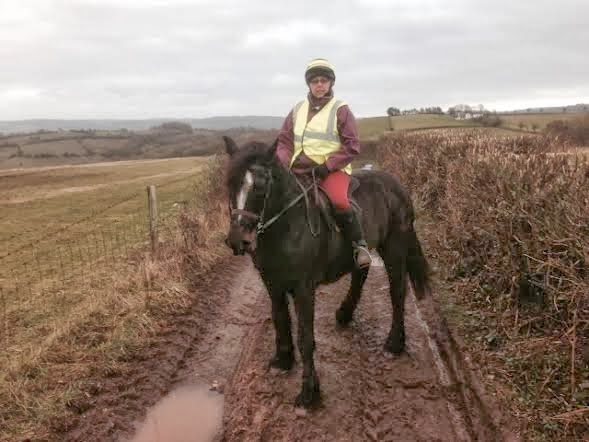 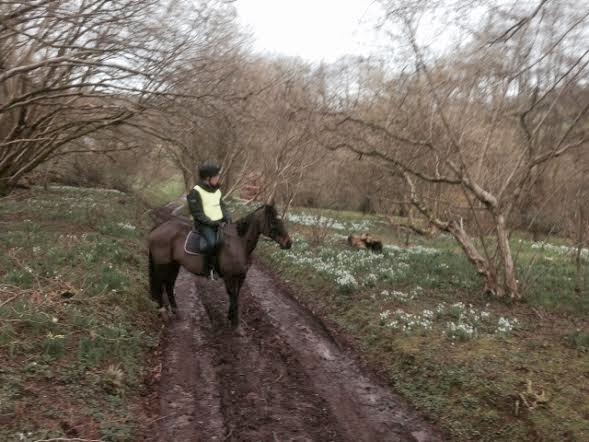 You actually make it seem so easy with your presentation but I find this topic to be really something which I think I would never understand. It seems too complicated and extremely broad for me. I’m looking forward to your next post, I will try to get the hang of it!
car removal near me
old car removal brisbane

Wow, that was strange. I just wrote a really long comment but after I clicked submit my comment didn't show up. Grrrr... well, I'm not writing all that over again. Anyways, just wanted to say fantastic blog!
cash for cars rocklea
cash for scrap cars rocklea

Hi, I am really glad I have found this info. Nowadays bloggers publish just about gossips and internet and this is actually irritating. A good site with interesting content, this is what I need. Thank you for keeping this web site, I'll be visiting it. Do you do newsletters? Can not find it.
car removal sydney
old car removal sydney

Simply want to say your article is as surprising. The clearness in your post is simply great and i could assume you are an expert on this subject. Well with your permission allow me to grab your feed to keep updated with forthcoming post. Thanks a million and please continue the enjoyable work.
scrap car removal ipswich
car removal ipswich