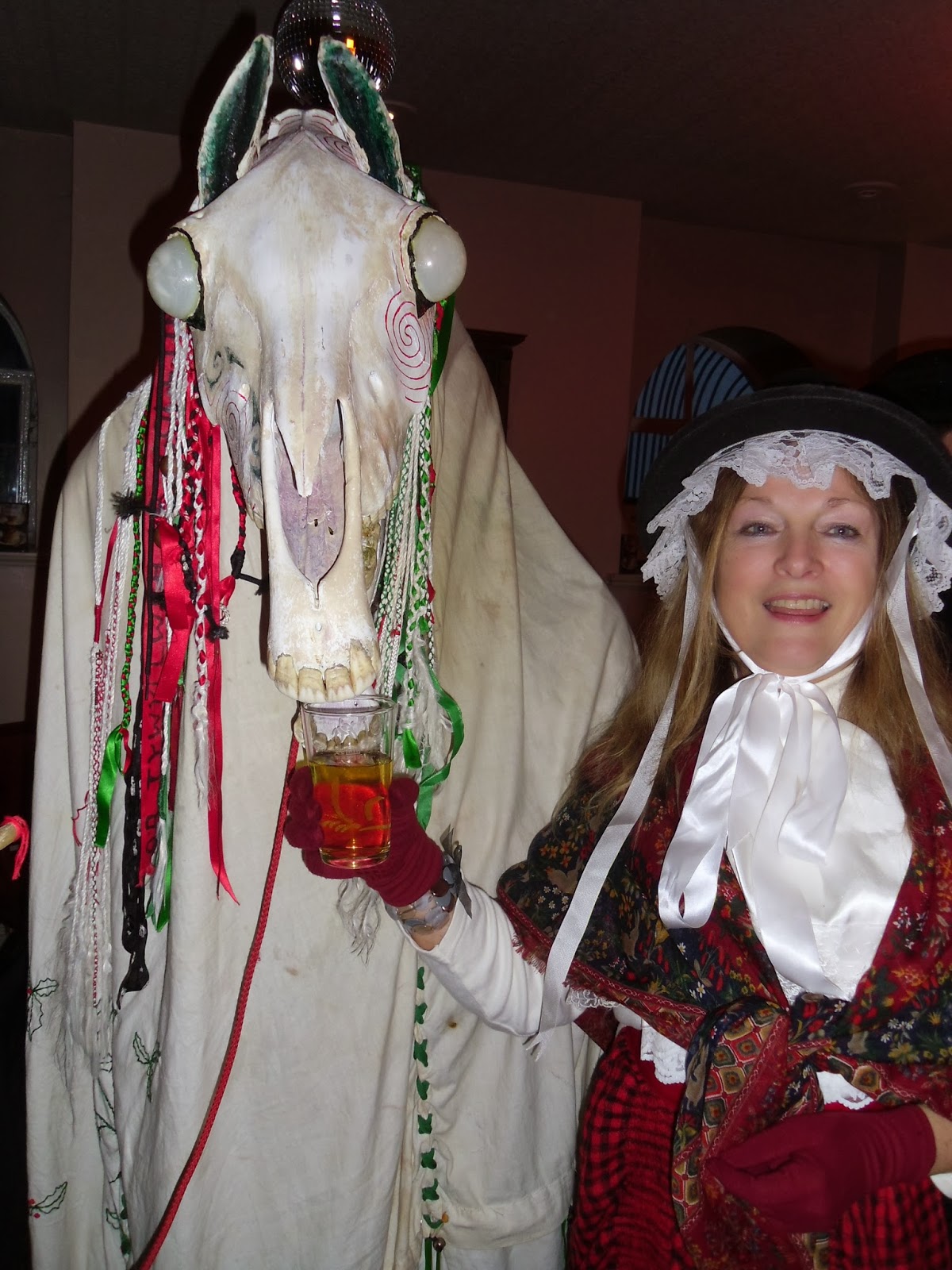 This weekend I went along to the truly fantastic Wassail Mari Lwyd event in Chepstow which provides an excellent showcase for one of Wales' oldest folk customs, 'The Mari Lwyd'.

The Mari Lwyd is essentially a large puppet head, made from a mare's skull mounted on a pole, over which a white sheet is draped. Cloth ears may be sewn on to the sheet and ribbons and bells are attached as decoration to the protuding skull. Coloured glass or other shiny material is fitted into the eye sockets. The jaw is usually wired so that it can be operated to make it 'snap' at people. The skull on the pole is carried and 'operated' by a man hidden under the sheet.

The Mari Lwyd is then 'lead' by its reins or a chain in a procession from house to house. Parties accompanying the Mari Lywd, often dressed in costume or disguise with masks or blackened faces, chanting, singing or shouting insults or exchanges at each door visited, in the hope of being invited in and given food and drink. Entry is not guaranteed as the occupants of the house throw songs or insults back in a 'contest' or 'pwnc'. The insult/song contest sometimes goes on for a very long time until the Mari gets invited in. On entering the house the Mari often proceeds to wildly chase any girls present snapping at them with its jaws until a gift of food and drink (and/or money) is offered.

The tradition of the Mari Lwyd is pre-Christian. It has been linked with the horse goddess Epona (her name meaning'Great Mare'), who features in Gaulish,Celtic and Roman inscriptions and also with the Celtic goddess Rhiannon, who has a strong association with horses. An interesting aside to this, is that the famous Fleetwood Mac song 'Rhiannon' is based on the Mabinogion legend of Rhiannon who, in the story of her pursuit by Prince Pwyll before she marries him, is featured riding a pure white horse with magical qualities. Another story is that the Mari Lwyd represents the horse turned out of the stable in Bethlehem to allow the Virgin Mary a place to give birth to Jesus. The horse has since roamed the countryside looking for alternative shelter. This story is perhaps reflected in the alternative translation of the Mari Lwyd as 'Grey Mary', rather than 'Grey Mare'. Abergavenny writer, Chris Barber, refers to this story and feels that what started as a pagan custom, may have been taken over by the early Christian church to form a 'cult' linked to the Virgin Mary which died out during the Reformation.

In folklore the horse features as a symbol of strength and fertilty. White or grey horses, real and mythylogical (such as pegasus and unicorns), and other animals such as white hart (deer) or white hares, were seen as having 'special', 'sacred' powers and the ability to cross to, or communicate with the 'underworld'.  Such animals have been revered in folk stories, songs and art for thousands of years.The most striking examples of white horse symbolism, can be seen as giant figures carved  into chalk hillsides around the UK. The oldest of these 'chalk horses' is the Uffington White Horse in Oxfordshire, which is 3,000 years old. However, most of the other chalk horses that are still visible have been created in the last 300 years. The use of an animated, dead horse's skull in the Mari Lwyd ritual, is symbolic with death and rebirth - and its use in a mid-winter wassailing custom, synonymous with the 're-awakening' of the countryside's fertility after winter.

Customs involving  horse skulls, horse worship or horse sacrifices have featured in many cultures around the world. In the UK our aversion to eating horse meat may well be linked to old customs like the Mari Lwyd which feature the horse as a 'special, 'sacred' animal. Other areas of the UK have traditions at different times of the year using symbolic horses heads which include 'The Hooden Horse of Kent', 'The Padstow Obby Oss','The Poor Owd Oss of Nottinghamshire' and 'Soul Caking' in North Wales and Cheshire.

In more recent times a re-surgent interest in folk traditions has seen the revival of the Mari Lwyd in some parts of Wales. An initiative by Trac - Folk Development Wales has provided funding to educate children and communities about the Mari Lywd to preserve the tradition. Watch a video about this initiative (worth watching to see some really great moves by the 'mare' in this). Examples of Mari Lwyd groups operating in South East Wales include Cowbridge, Llantrisant (near Maesteg), Llanvihangel Tor Y Mynydd and also at St Fagans (National Museum of Wales). Chepstow's Wassail Mari Lwyd event has for the last few years, combined several midwinter customs such as Wassailing, Mumming and The Mari Lwyd, into a January festival day featuring these old traditions albeit in a rather less 'traditional' but high profile way, this is helping to preserve the tradition of the Mari Lwyd.

Watch a video of the Chepstow Wassail and Mari Lwyd 2013 (my photos from the 2014 event below).

An incredible eight Mari Lwyd's in one place! 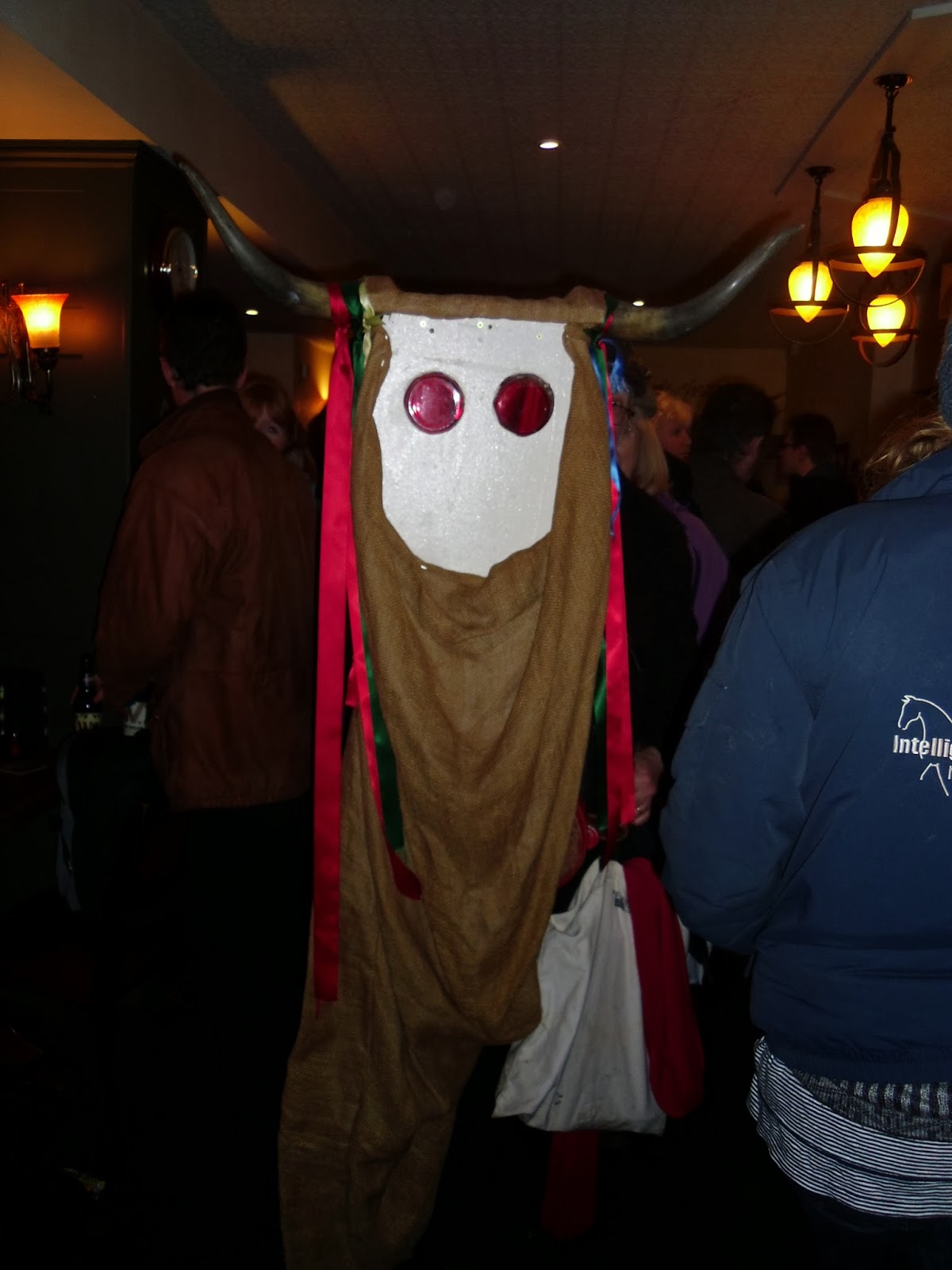 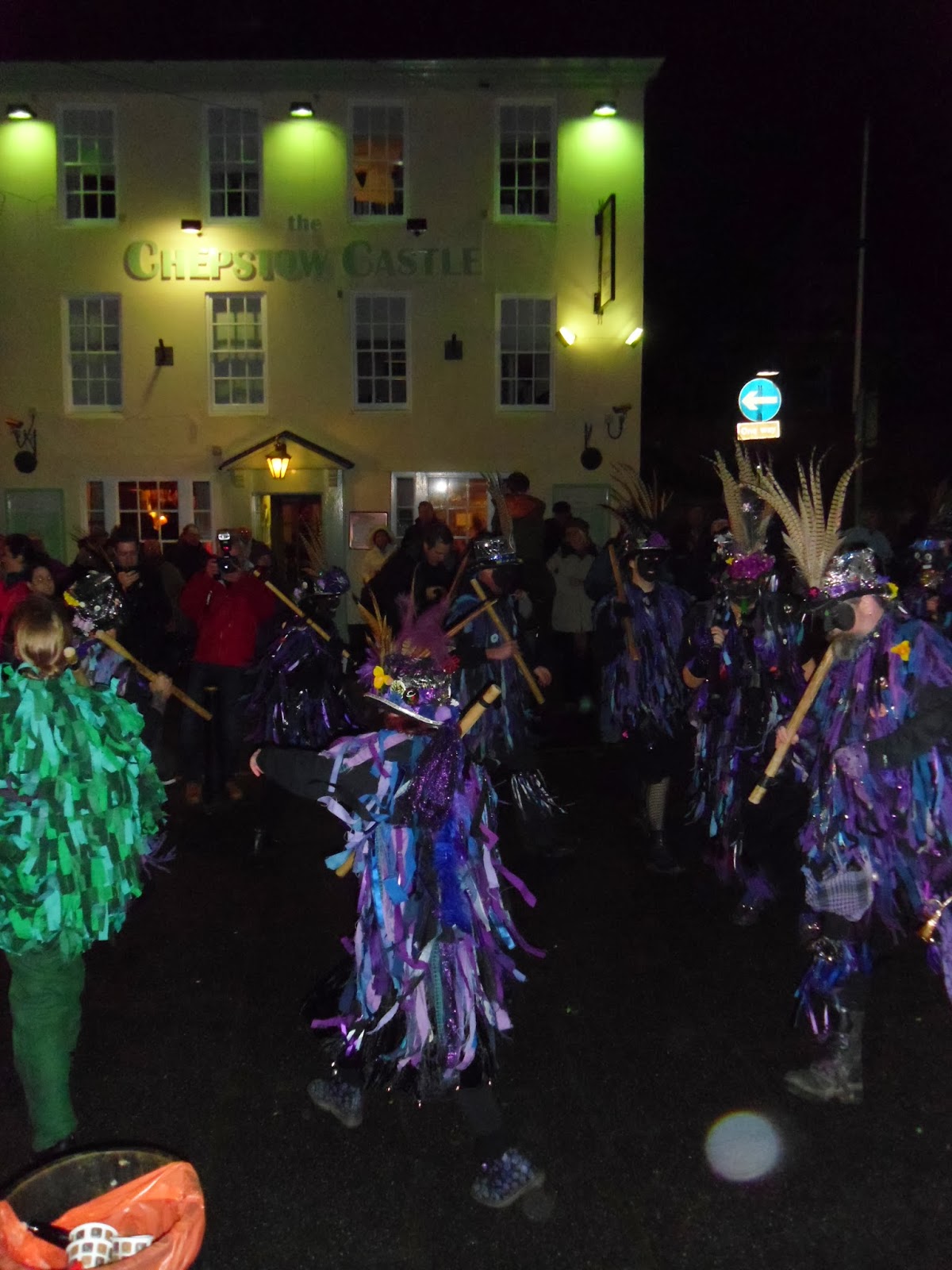 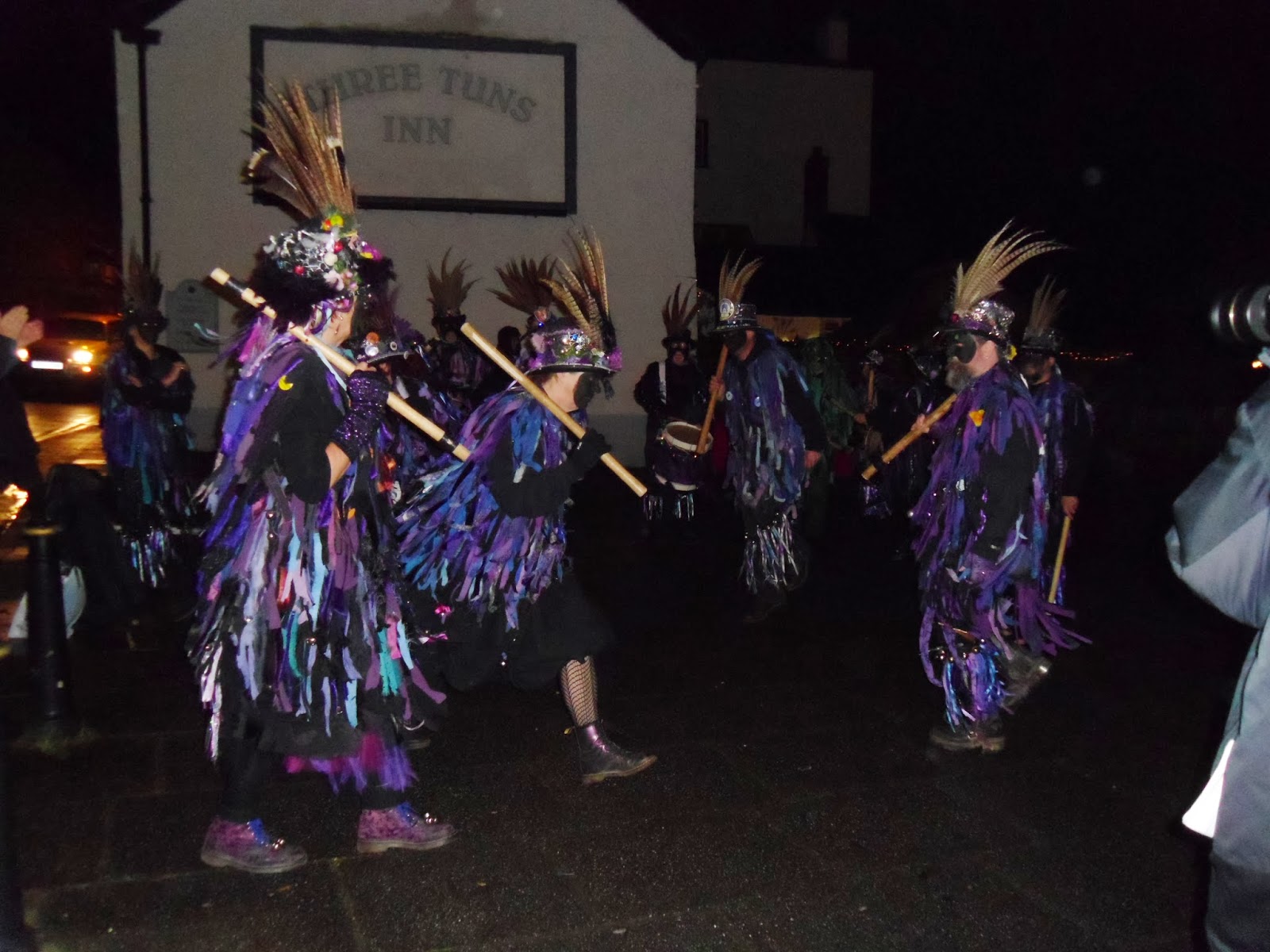 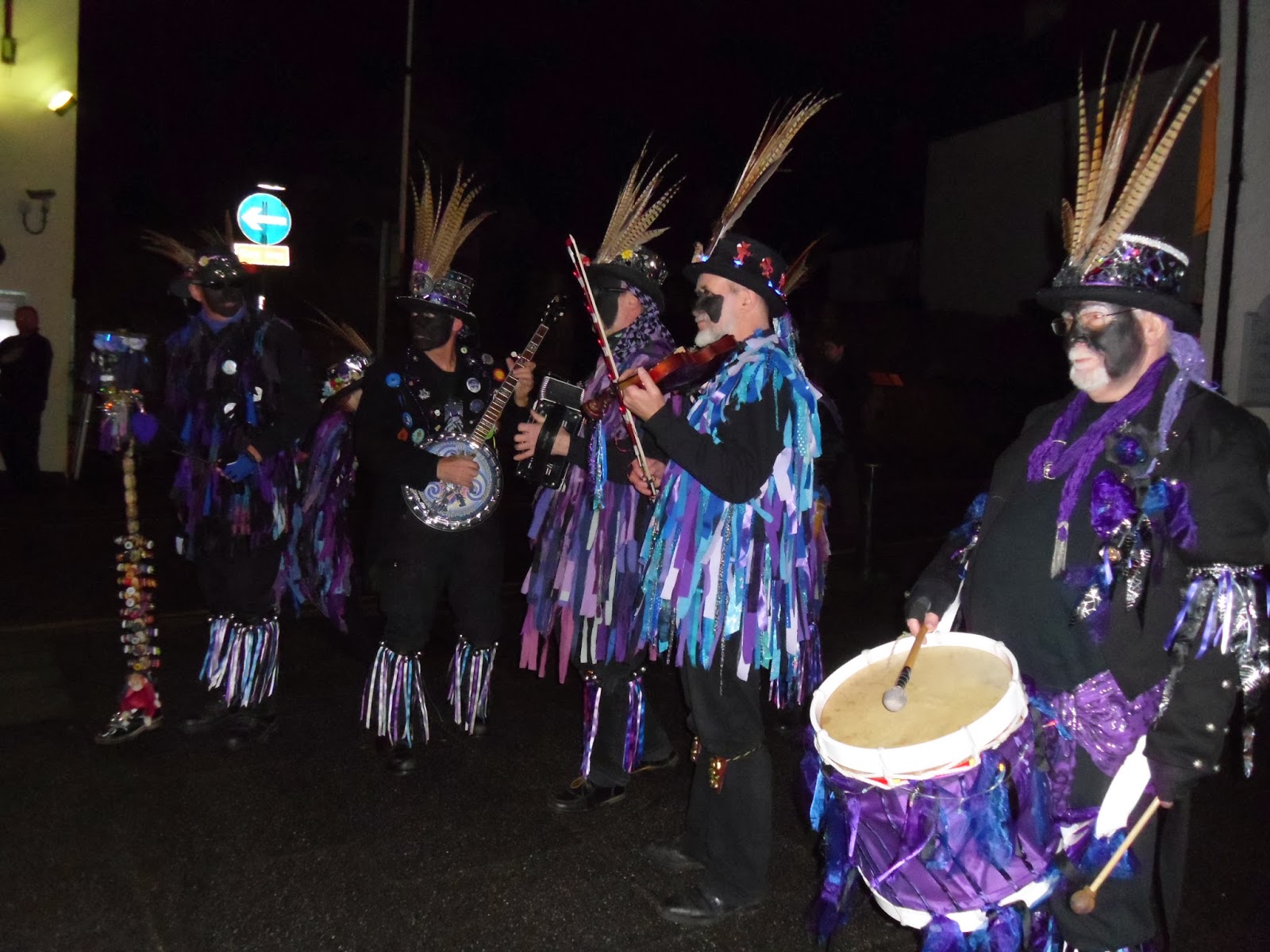 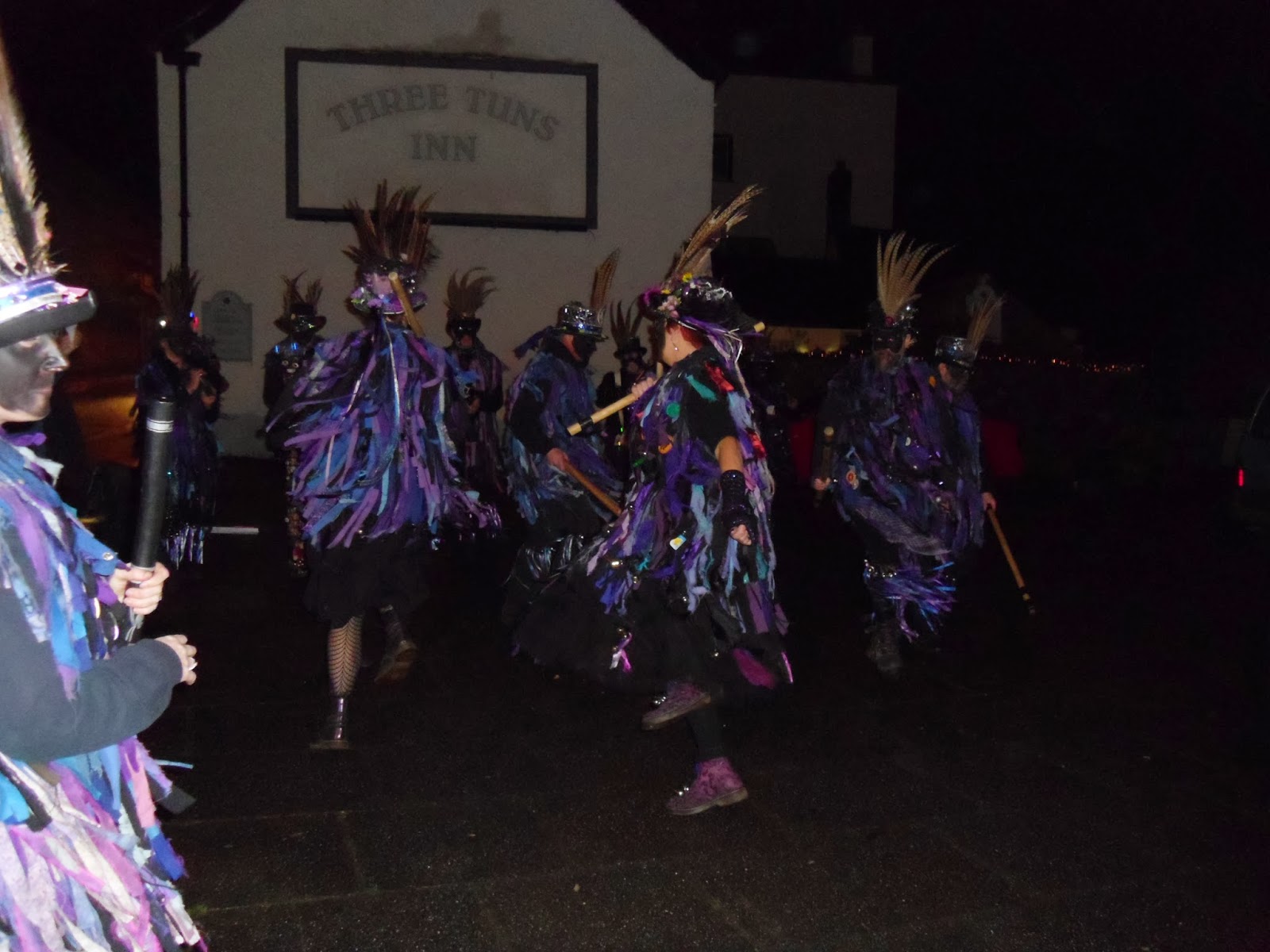 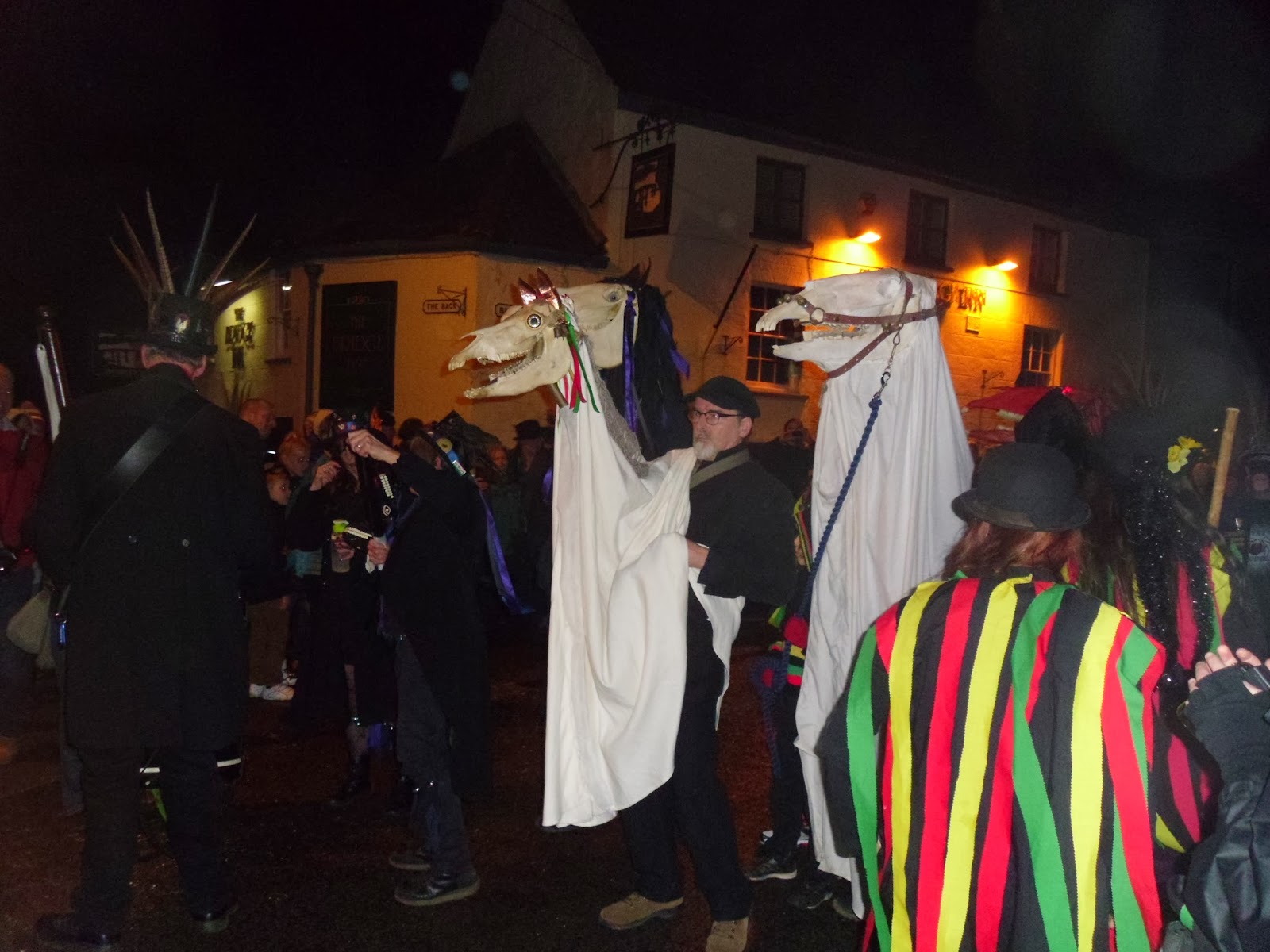 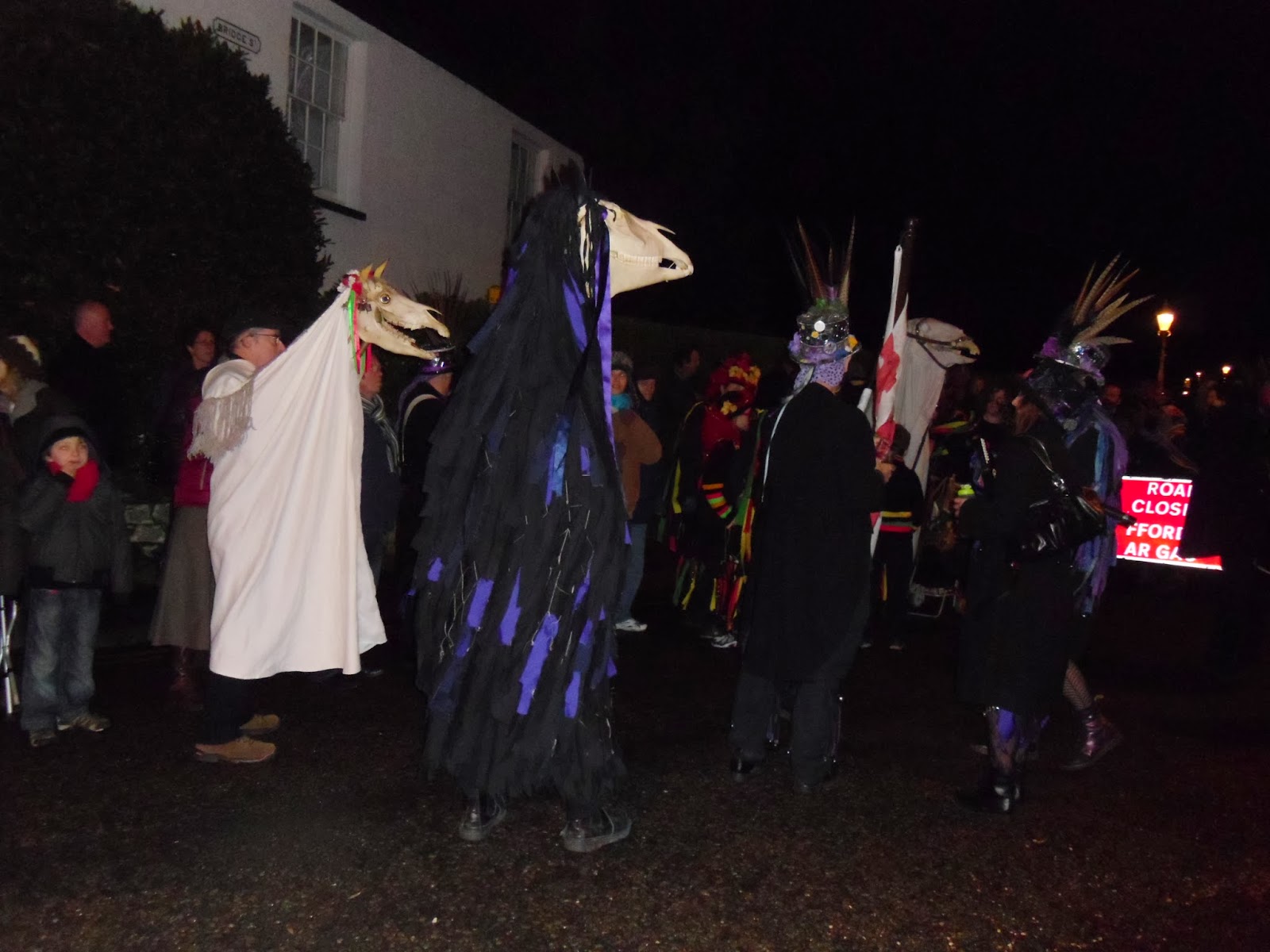 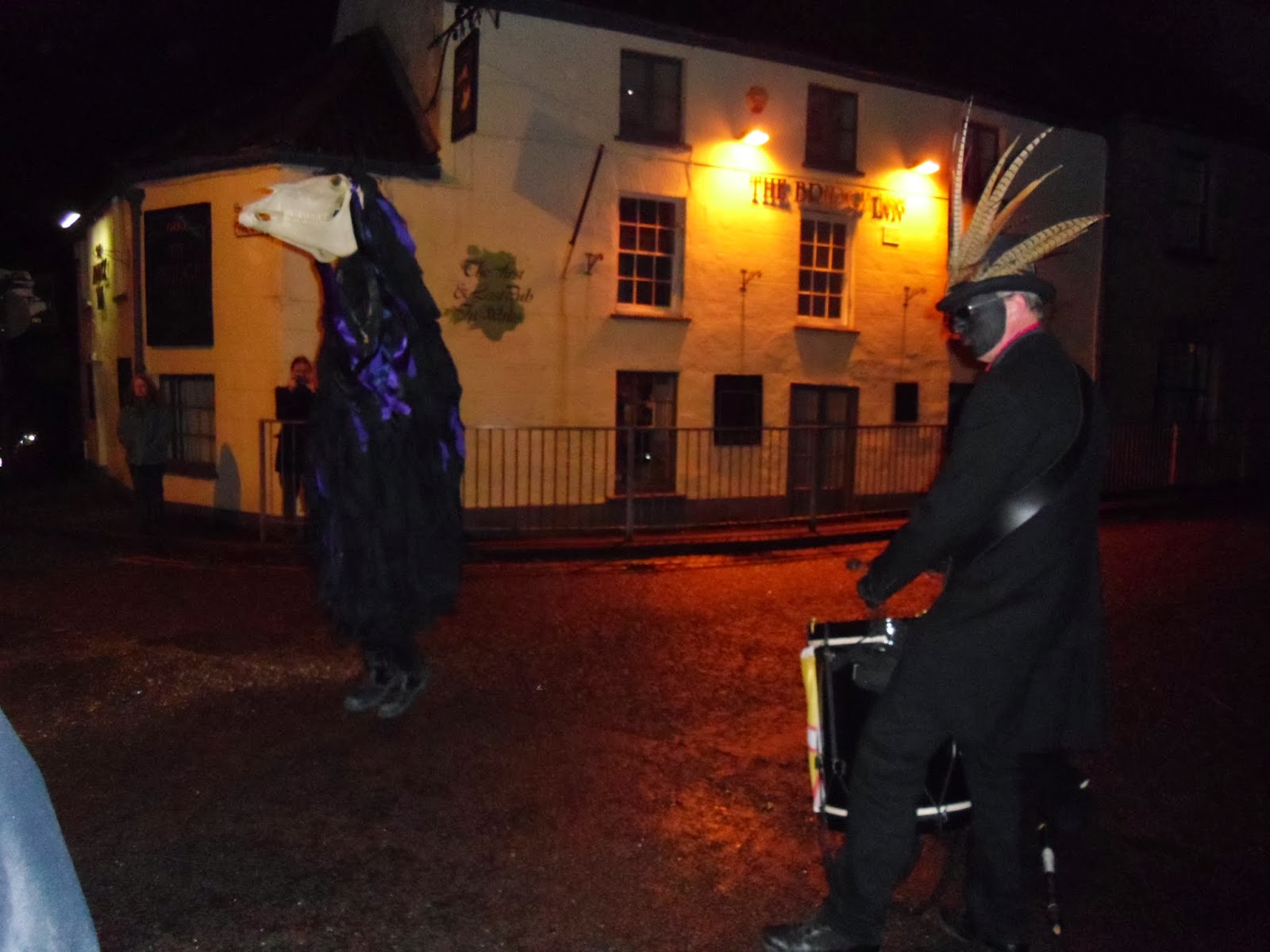 A new annual Mid-Winter 'custom' linked to the Wassail Mari Lwyd festival has begun in Chepstow. A large crowd gather to follow the Mari's across the River Wye for a meeting between the Welsh and English, at the centre of the old Wye Bridge,  - the two sides challenge each other - there is much 'roaring' and noise, it could be war but thankfully peace reigns - the toast of  'WASSAIL!' is shouted on both sides and everyone shakes hands, kisses and makes friends!! 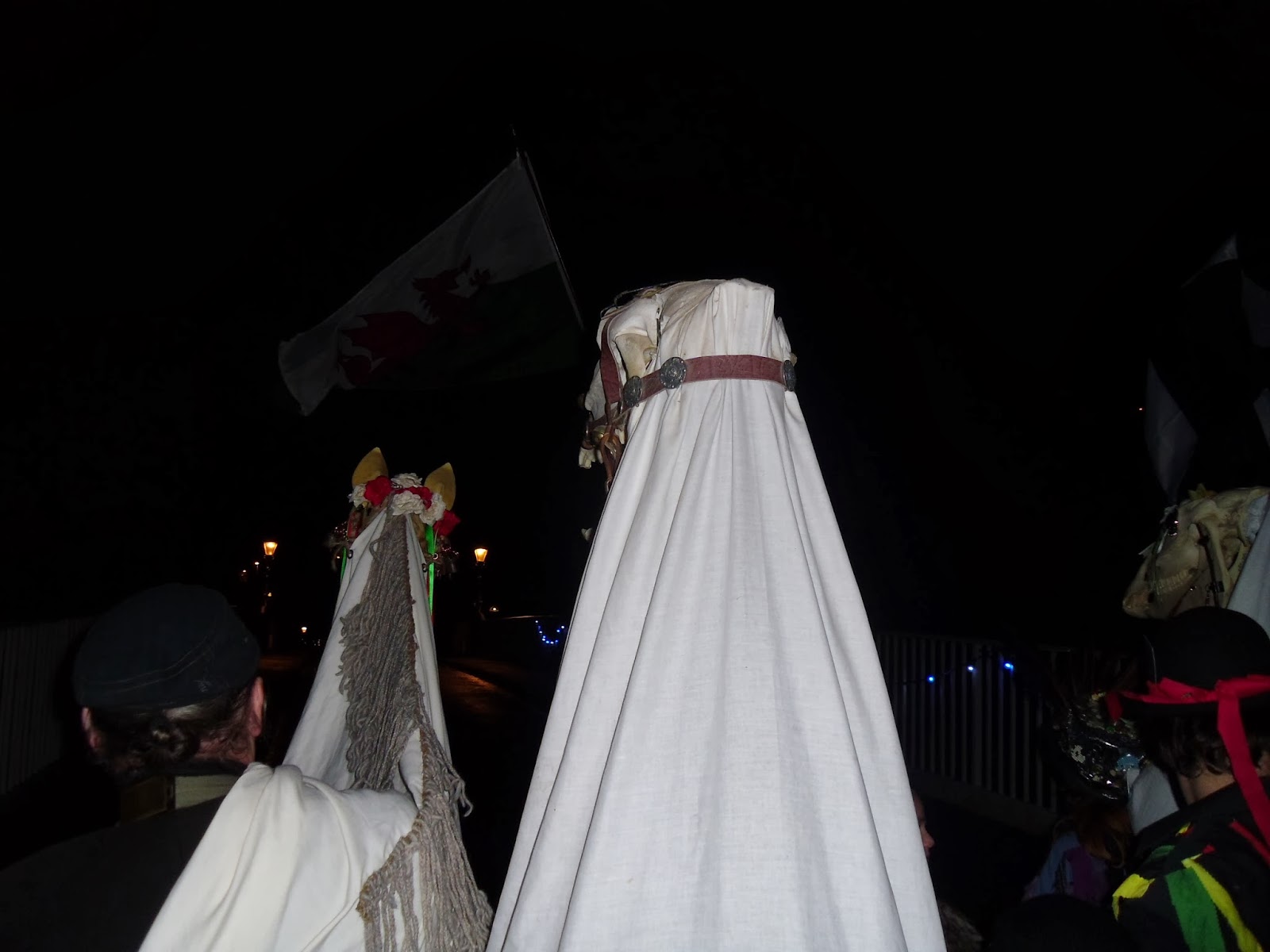 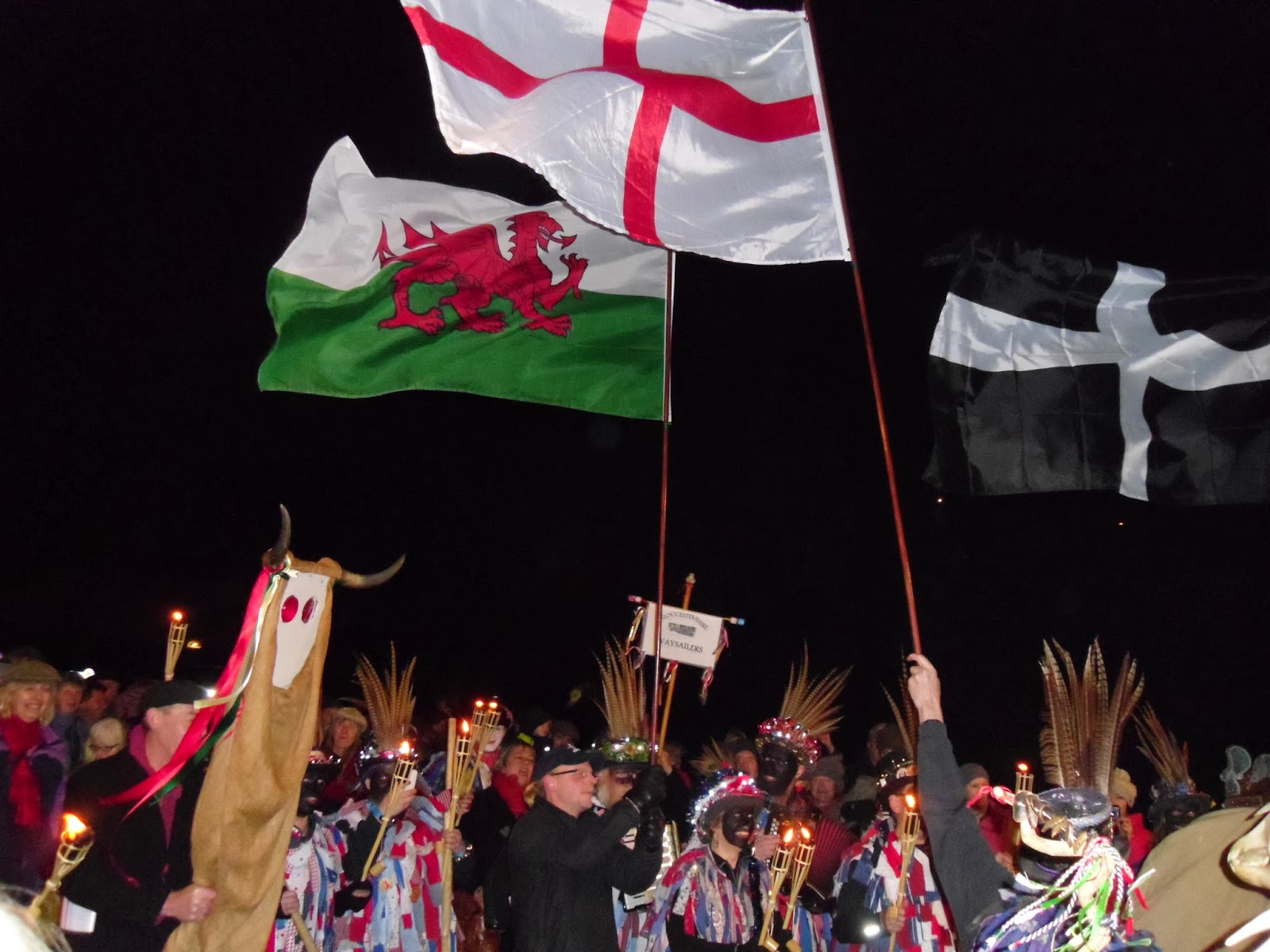 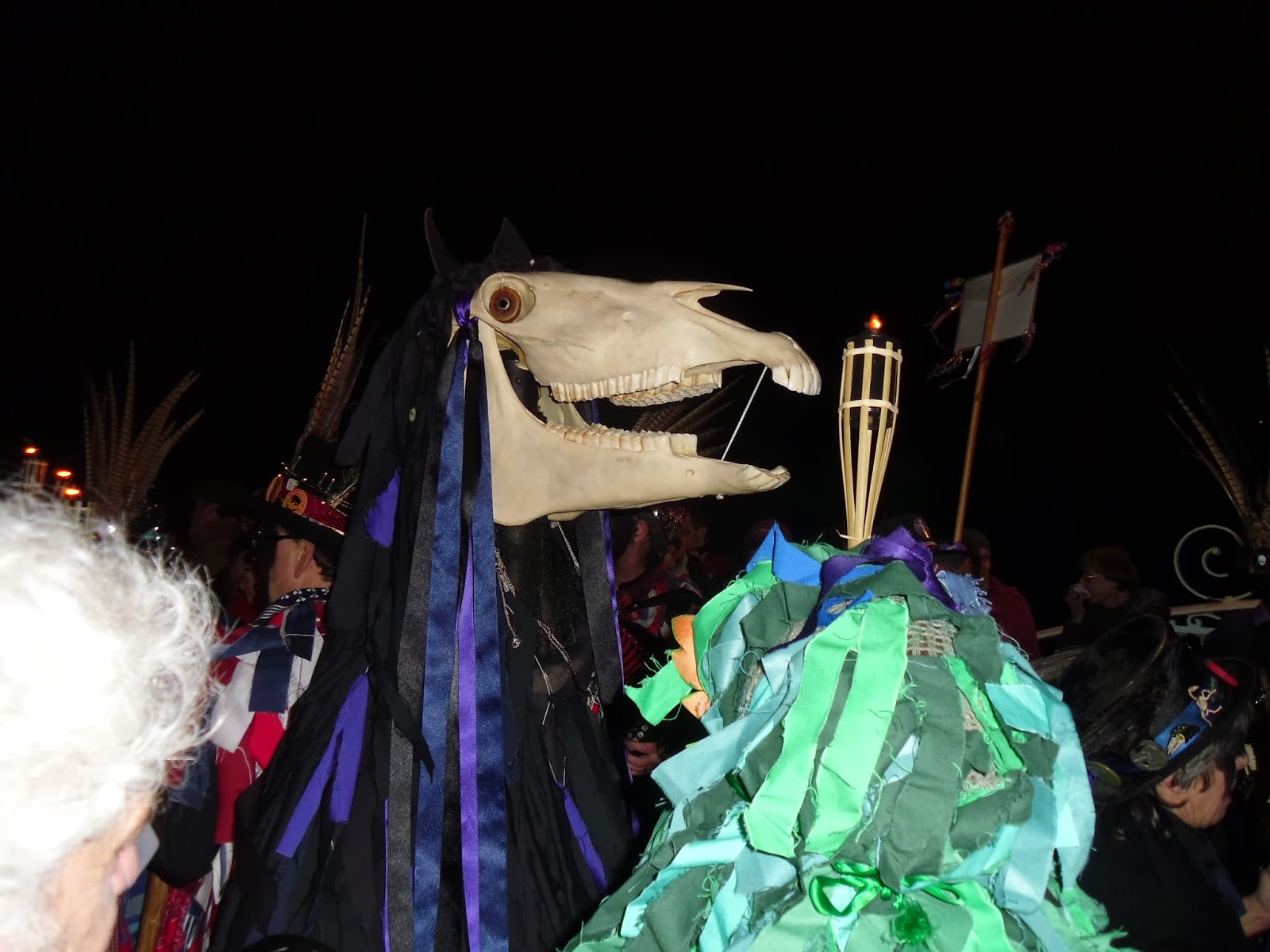 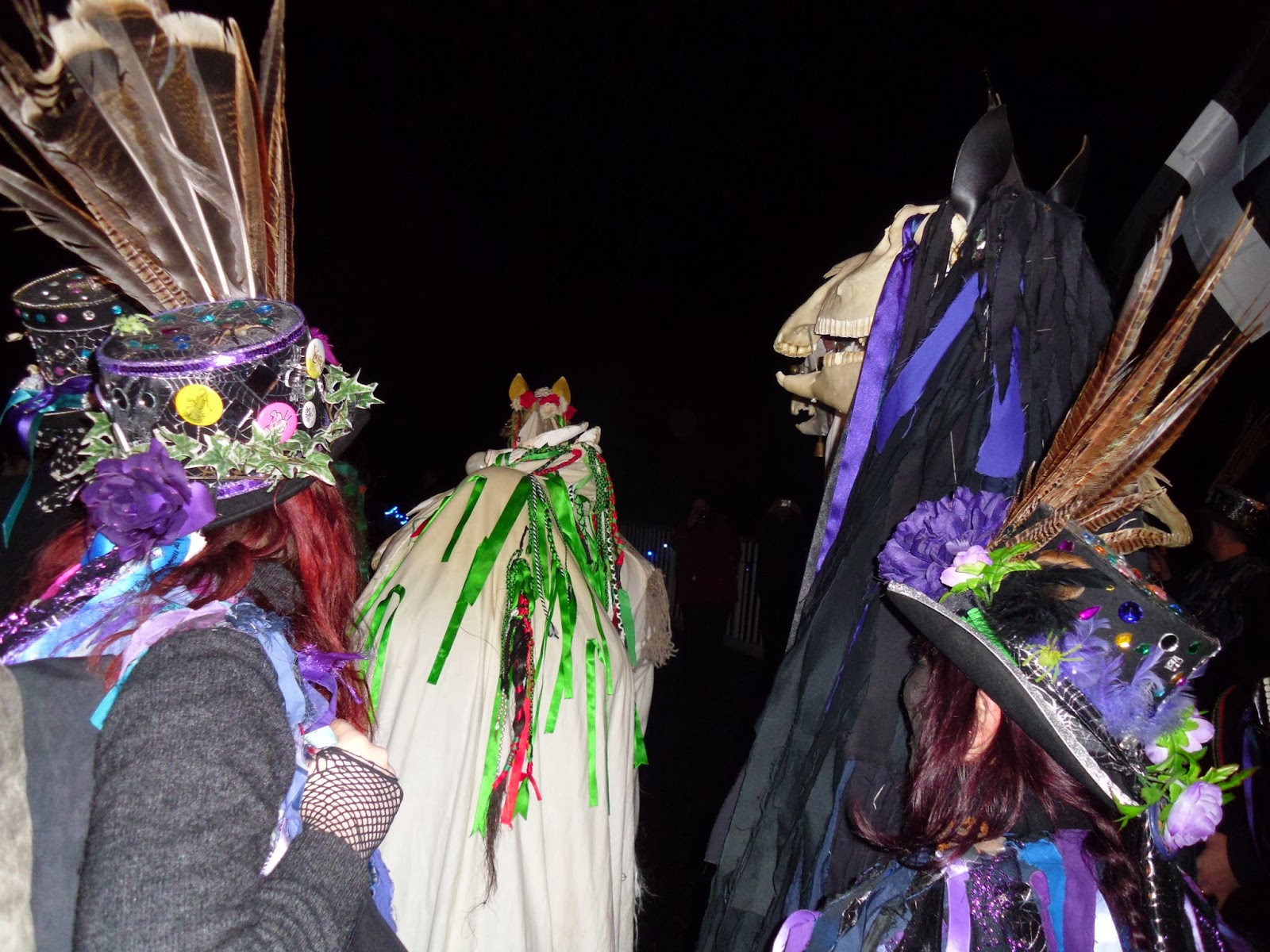 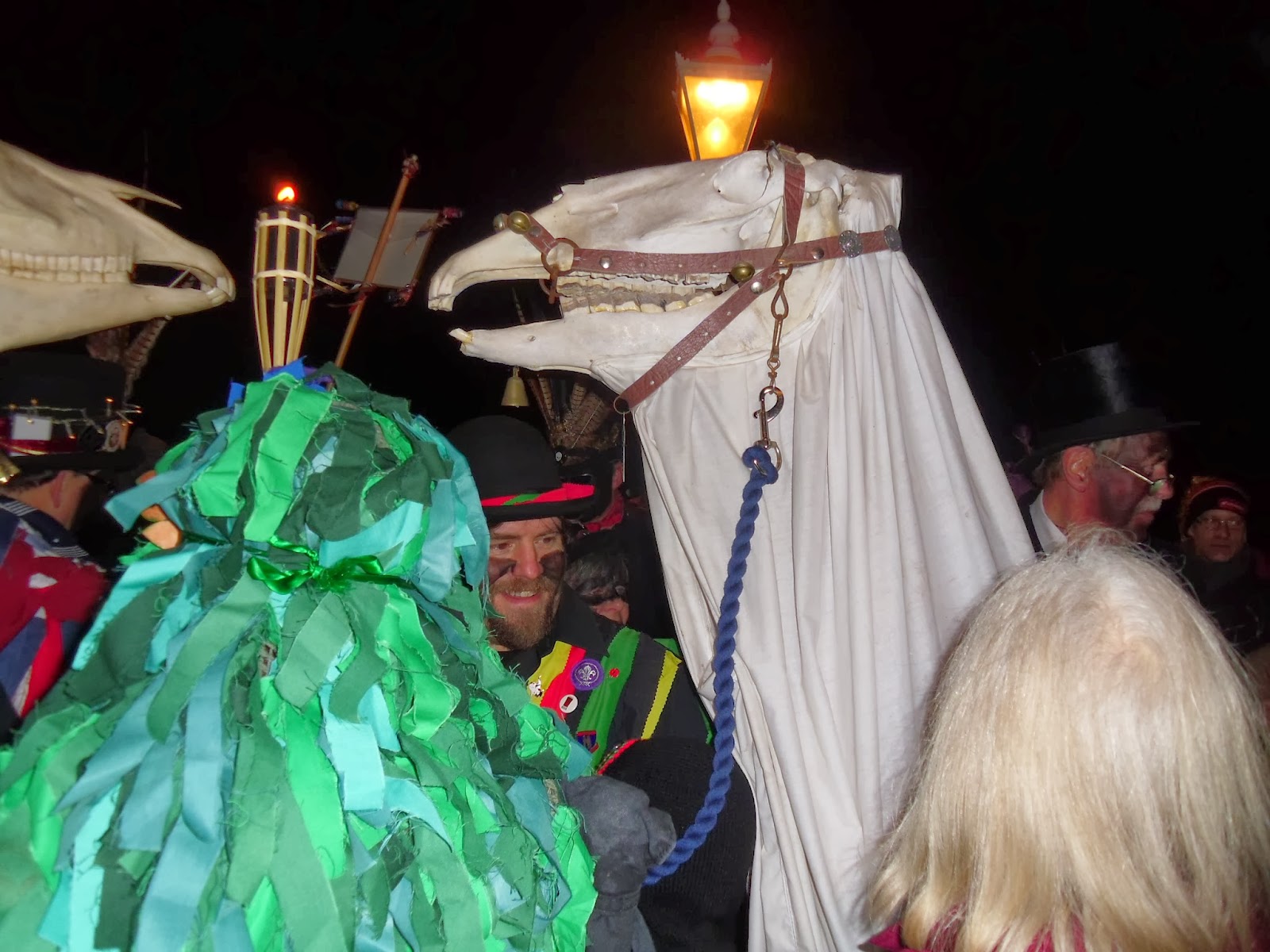 Then it's back across the bridge to Chepstow with our new friends from England!
The Mari's group for the 'Pwnc' at the entrance to Chepstow Museum - songs are sung, verses are chanted on both sides of the door and eventually the Mari's are granted entry - plenty of mulled cider awaits them! 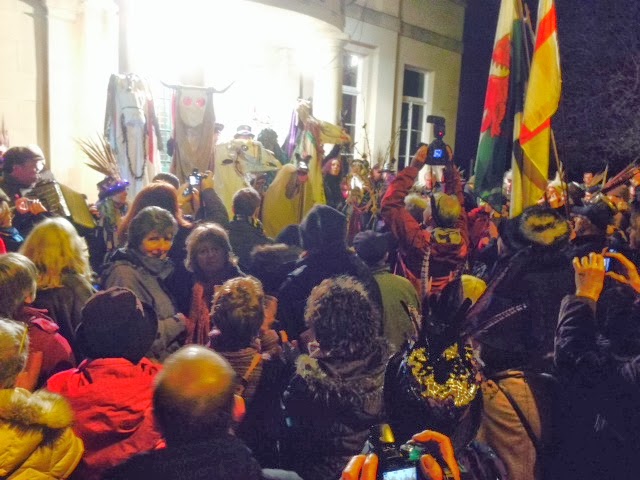 From inside the house

What, ho! Morganwg's happy land
Is full of corn and barley
What, ho! is your request - demand?
Answer! We grant short parley

From the Mari Lwyd party outside

Honest men are we, who sue
Favours many, money due
To the Mari Llwyd from you!

From inside the house to end the contest 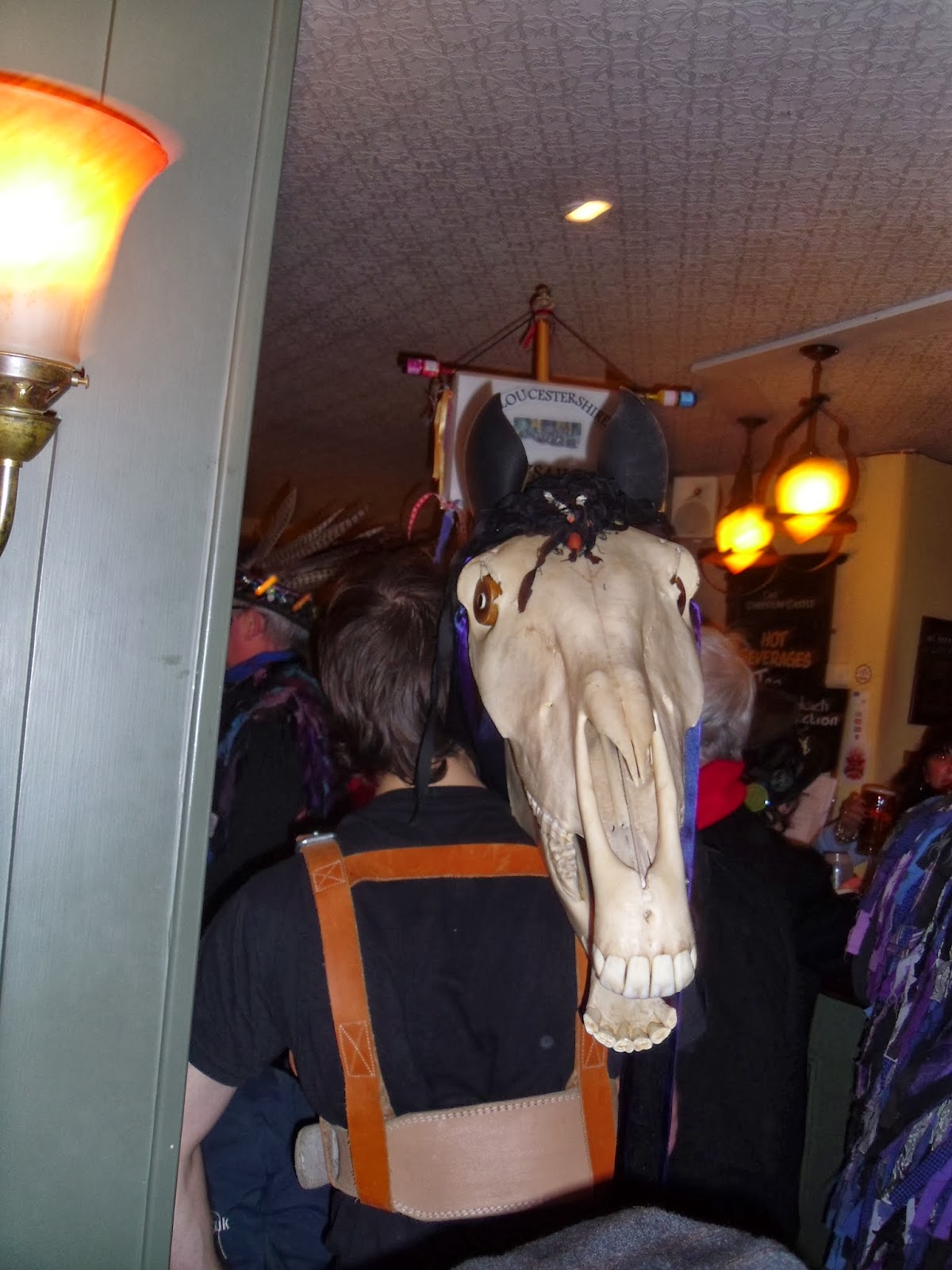 The Customs and Traditions of Wales - Trefor M. Owen 1991

The National Museum of Wales 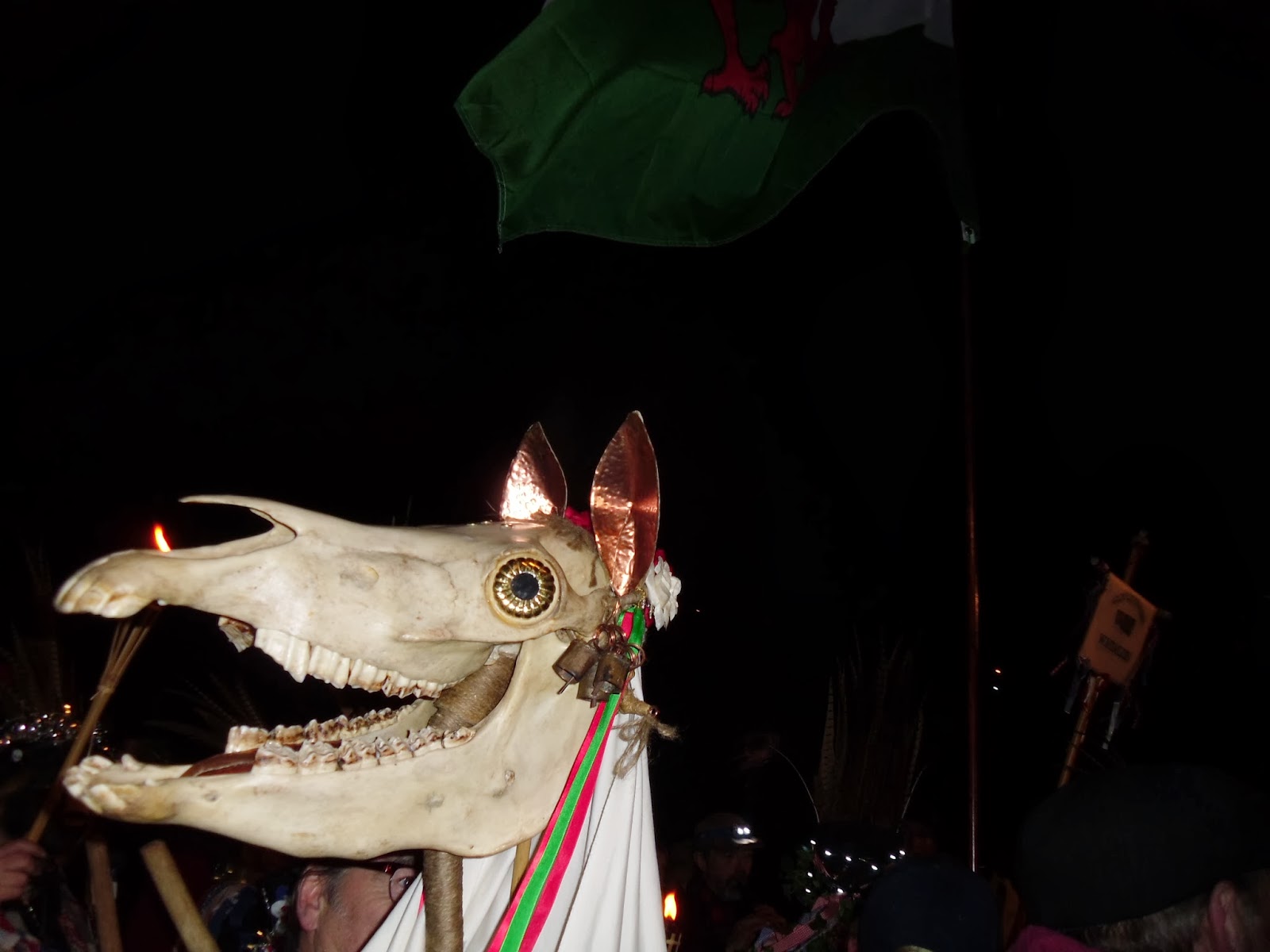